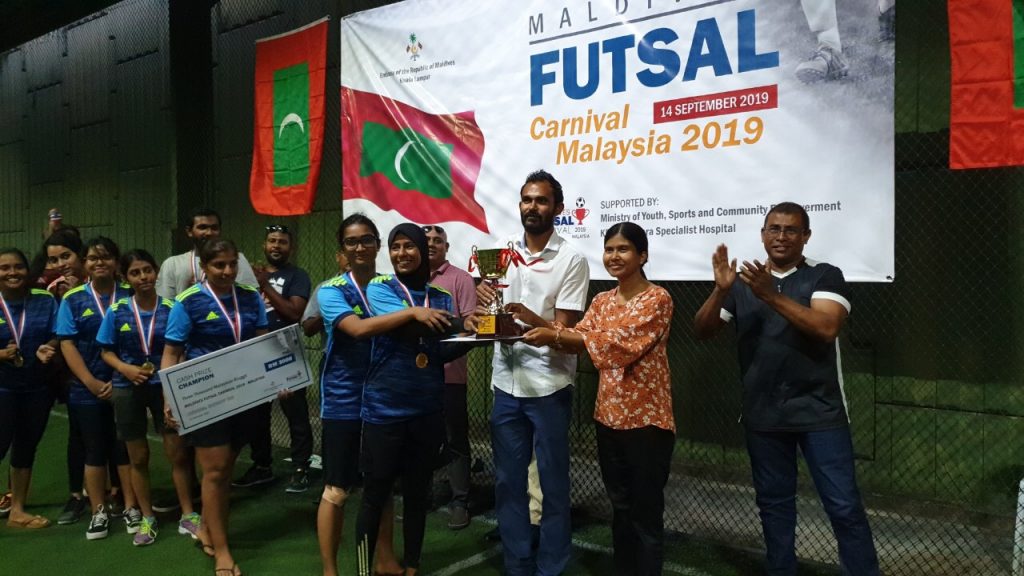 Valkyrie United lifting the trophy after beating Fatsal in the women’s final match.

The carnival was supported by the Ministry of Youth, Sports & Community Empowerment of Maldives.

This event is one of the most awaited social events organised by the The High Commission for the Maldivian community in Malaysia. More than 170 players played in this year’s tournament, with 15 male and four female teams.

The event started at 8.30am with a welcome speech by the The High Commissioner of Maldives to Malaysia, Her Excellency Visam Ali. In this fun-filled event which extended until 7.00pm, the Maldivian community gathered to spectate Maldivian youth play the country’s most popular sport.

The event was aimed to encourage the Maldivian community to participate in sporting and physical recreational activities while nurturing talent among budding futsal players.

The success of the event also reflects the closer bond between the The High Commission and the Maldivian community in Malaysia.

Our system administrators have informed us that our website is constantly being attacked by hackers while many of our customers are trying to access the system. We strongly condemn such actions during these trying times.

Sorry to hear that British PM @BorisJohnson has been admitted to hospital,10 days after testing positive for #coronavirus. Wishing the PM a speedy recovery and sending best wishes and prayers to him, and all those suffering from this virus. Get well soon!